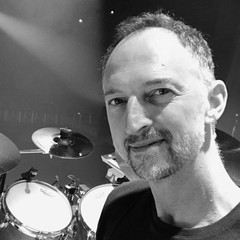 Mark Walker, a multiple Grammy winning drummer, composer and educator, began his career in Chicago in the late 1980’s. After gaining experience in a wide variety of  settings, he became a first-call jingle session drummer/percussionist and began touring regularly with the Lyle Mays Quartet and Paquito D’Rivera’s Havana/New York Ensemble (featuring Giovanni Hidalgo and Danilo Perez) in the early 1990’s.

He moved to New York in 1995 and immediately started touring with the Caribbean Jazz Project (featuring D’Rivera, Dave Samuels and Andy Narell). He soon got the gig with Michel Camilo, playing in his trio and recording projects produced by Camilo. He also began his long stint with seminal world-fusion group Oregon, featuring Ralph Towner. During this time, he also worked extensively with Eliane Elias, Linda Eder, the WDR Big Band, the NDR Big Band and Cesar Camargo Mariano, as well as local gigs with the best musicians in New York. He was also featured in Fernando Trueba’s film Calle 54 with Paquito D’Rivera.

In 2001, he was appointed professor at Berklee, where he authored his instructional book, World Jazz Drumming (Hal Leonard), developed curriculum, and taught labs, ensembles and private students. Some of his students have become very successful, even subbing for him on high profile gigs. He also authored the Berklee online course Afro-Cuban Drums. He has taught master classes and workshops in Europe, Latin America and Asia, and maintains his own video lesson website, www.markwalkerlessons.com.

He moved to Boston in 2005 and currently operates his own studio, Coolidge Hill, where he composes, teaches and records on tracks for various composers and arrangers. He also has recorded original tracks for music licensing sites, which have sold worldwide and have been featured on major TV network shows. He also has composed music for film. He presently tours with Paquito D’Rivera, Oregon, Michel Camilo and others. He is a Paiste, Yamaha, Vic Firth and Remo artist.