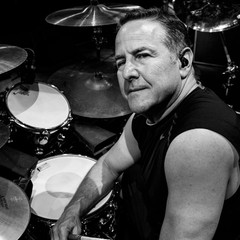 A brief NEW biography from Mark himself covering his musical origins and influences as well as a look at his past, present and future musical endeavors:

"I had my first drum lessons at age 7 in Los Angeles. We had moved the year before from Detroit MI, where I was born. My first lessons were out of the Buddy Rich book. As a typical 7 year old boy, I did not practice that much. I had my little practice pad, but was more interested in banging on the suitcases I set up for a drum set. There was no particular kind of music I liked, but was interested in all kinds. I have memories of the first Monkee's album that my Dad bought us the minute it came out to Rubber Soul by the Beatles. My parents were listening to Herb Alpert and the Tijuana Brass and it became a favorite of mine. As time moved on, I was drawn to athletic interests like baseball and basketball, with not too much time for the drums. I wish I had some of that time back, but I guess everything works out for a reason.

"I played in the school bands all the way from elementary school through high school. I was also jamming with other guys I could find. I used to play with a friend of mine who played the sax. We used to play really bad versions of Chicago's first album. I loved the sound, but we were horrible.

"When I was around 12 I got a job at the local music store in San Jose, where I was taking lessons and handing out music flyers in exchange for cymbals. I met many of the guys who worked at the music store and was asked if I wanted to jam with them outside of the store. These guys were much older than me, all living together in the quintessential "jam pad". If you can visualize it, I was a 12-year old kid being driven over to these veteran guy's jam pad with my little blue sparkle drum set. This was my first experience with loud amps and stuff. A bit intimidating, but I liked it. My poor Dad, who had a Masters degree in Chemical Engineering was playing roadie for his 12-year-old son.

"My parents were always supportive of my drumming. As long as I practiced and showed interest, I had my lessons. I actually never had a professional kit until I was 12. I spent much time with a practice pad. I recall one occasion when I got a snare drum that came with the lessons and became very frustrated so I decided it was cool to plant the sticks through the drum head. Well, this didn't go over very well with my parents and the lessons were put on hold.

"For the next few years I played with various cover bands playing a few originals. We did everything from heavy stuff to commercial music. This was a big learning experience. I still really wasn't giving the drums the time and effort I should have.

"While playing in a local band, I met Bill Tsamis and I joined him with the Warlord band. We would spend hours of just playing guitar and drums. This is when the serious dedication started to kick in. It was a very musically liberating experience. I was able to really stretch and grow musically.

"Bill and I decided to move to L.A. to follow our dreams. We moved into a small part of a big building in North Hollywood. We auditioned singers for what seemed like years and could never find our man. We recorded a couple of albums and a self-produced video and things just sort of fell apart. The first album "Deliver Us" was done for $800. It was an eight-track recording with the two bass drums and the bass merged on to one track. So much for high tech recording."

"As things fell apart, I sort of wound up with our building/rehearsal studio. Since I played the drums, I needed the space. One day a friend of mine asked me to use the space and pay me $20. A light bulb went off and within a year I had taken over the entire 10,000 sq. ft, building. That is how my original rehearsal and recording studio known as Bill's Place was born.

"Long story short, 4 years later I bought a 6000 sq. ft. building, designed and built the new Bill's Place. It took about 7 months for the builders and we opened right after New Years in 1994.

"We have had some of the biggest bands in the world as well as some of the smallest bands, and everything in between. Bill's Place is still going strong. Anyways, back to music. After Warlord fell apart I dove into any band situation I could. It did not matter the style. I would rehearse with a funk band from 12 to 3, then a techno dance band from 3-6 and then a rock band from 6-10. Since I had the studio, my drums would stay setup and the other musicians would come in and out. Needless to say it was a serious growing period.

"The Animotion Era: One of the best musical educations I got is when I played with Charles and Astrid of the band Animotion. They were coming from an entirely different musical place than I was. I was willing to learn and they were willing to teach.

"I remember the initial meeting very well. They were coming off of a serious amount of success with Animotion and when we met, everyone had long hair and the rock look going on. As much as we were coming from different musical places, at least the look was consistent, or so I thought. Then we get together to play for the first time and they had all basically shaved their heads and went for a completely different look. Boy was I shocked and more importantly was quite unprepared at that point in my life to go Kojack. Everything worked out and I learned so much about electronics, sequencers and click tracks. This was a situation that I was playing all pads through an interface that was triggering a very early Akai unit. I was getting the click with the keyboard player that was also tied to a couple of sequencers. Like I said, I learned a great deal. Even though I was an outsider, Astrid and Charles treated me with the utmost respect and probably to this day the thing I remember most about them was their character and qualities as human beings. This was a great experience for me.

"The Fates Warning Era: We had a tough time getting a deal for the band as the music scene was changing. I got a call from Jim Matheos of Fates Warning. He wanted to know if I was interested in playing with Fates as they were thinking about a drummer change. Jim was a Warlord fan and we had met a few times in the past as I used to do drum tuning in the studio for Bill Metoyer at Metal Blade on many of the early Metal Blade releases. As things worked out I started working on material and before I knew it I was in Connecticut at the Carriage House Studios recording the Perfect Symmetry album. The past fourteen years have been spent with Fates doing several albums, both live and studio and several American and European tours. Recently, Fates toured with Dream Theater and Queensryche. I am very thankful for all of my experiences with Fates. I have been able to meet many people both in the music industry and general public that I consider friends. The music has been challenging as well as I have gotten to see the world doing what I love to do.

"Currently I am involved with several recording projects and plan to continue releasing albums and touring the world.

"I appreciate all of the fan support and encourage you to keep checking back to this site for release dates, tour info and updates."

I started the band as I wanted an outlet for many of the drum ideas that I was recording. I spend a lot of time practicing and writing interesting parts. It is very difficult to apply many of these ideas to existing musical ideas, so I decided to start with the drum idea. There are probably 70% if not more of the songs on this album that were started with drum ideas. I would give these to Wayne and he would come back with ideas of his own and we would arrange the song from the part on. So with this idea of drums first, as soon as Wayne has an idea we like, the song has a very strong direction.
Wayne and I would get together 3-4 days week and just work very hard at this. We did spend a lot of time recording demos and producing the various ideas we wanted. The ideas flow very easily between us.
Then we would send basic song structures to Gregg and he would write the lyrics and melody lines. Pretty simple process.
I would say the music is modern, heavy rock. There is a progressive side to it, as we do have plenty of odd time, but I make sure that it all grooves and feel good. We didn't want to turn this into an overly complex musical band. We wanted to make sure you could tap your foot and sing along. It was designed for the masses. Strong melody lines and hooks were a main concern as well. We put a lot of attention to detail into making these radio friendly songs.
We did not have a chance to play anything live before recording. We were very lucky to find a local San Diego engineer, Joe Marlett to do the album with us. His influence and ability has a large impact on the album. The album was recorded in San Diego.
Drums were recorded first in a nice room with a vaulted ceiling. The is very little reverb on this album, but more room sound and compression. This accounts for the very modern sound of the album. The everything else was layered. The mood was very easy going. We were very excited as things moved along and you start to hear what it is going to sound like. Everyday during the mix was great as we would continually get blown away by Joe the engineer and what he was doing with our tracks.
Dove is probably the most important as it has the greatest chance for radio crossover. A commercial rock tune, big chorus and reggae verses. This should really be a big song for us. Swept Away is another song that should be on the radio. Funny thing about this song is that it is basically in the time signature of 5. But it has such a catchy groove, and needless to say a great vocal performance, that it should do well at radio. Another Planet is a special song, as it has the monster groove and unique verse to chorus setup. Then for the semi-prog people, Red Road has more of that prog tune layout, with long musical sections and various leads. But again, a serious big time chorus hook. All of these songs have in your face, draw you in vocal performances.