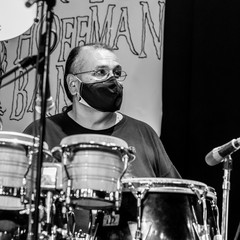 Martin Flores is a Grammy Award winning musician with many accomplishments to his career. Born on December 3rd 1968 in East Los Angeles, California, Martin Flores was destined to be a Musician. His Father, Carlos Garcia Flores (7.10.1915-12.6.1999) was from Orizaba, Veracruz, Mexico. A Beautiful little “pueblo” in the mountain peaks of a picturesque and Music filled state of Veracruz. His Mother, Guadalupe “The Looper” Angulo Flores (9.20.1931- 9.18.2001) was from the mountains of the Mariachi and Tequila Capital state of the world San Francisco de Asis, Jalisco. Martin’s father introduced him to his first drum set at age 13. He learned to play on his own then joined Jazz bands at the famous Eagle Rock High school directed by the late Trumpeter, John Rinaldo. Studying with great Jazz drummer John Tirabaso and watching such greats at the “Jazz at Eagle Rock Sundays” such as Shelly Mann, Carlos Vega, to name a few, Martin played Jazz competitions and won many “best drummer” awards. Martin attended Los Angeles City College and Pasadena College to study and play in drum and percussion ensembles. Martin began recording jingles for TV and Film Scores in 1992, since then he has over 200 to his credit. He has played in various bands and styles such as “Bateke Beat” a fusion of African rhythms with the leader Bateke from Congo who played Bass, Sax Percussion, and Kalimba (Thumb Piano) and was one of Fela Kuti’s musicians in Nigeria playing Afro Beat. In 1994, Martin got a call from a famous European artist to play Percussion named Tabuley Rochereau and Orchestre Africa National on their world tour. Tabuley is credited with creating the “Soukous” style, a guitar heavy bass with energetic drum portions, which makes everybody want to get up and dance! Martin was then awarded the drum chair half way through the US leg of the tour. Martin also played in Makina Loca, a fusion of Afro Cuban and Congolese Rhumba using a Timbale set up on his left side and developed strong Independence. Martin has recorded and toured with Pop Latino Music artists such as, Paulina Rubio, Graciela Beltran, Vicente Fernandez, Alexandro Fernandez, Juan Gabriel and many others. Martin is currently on tour with Grammy Award winning artist, Joan Sebastian.

"Remo has been an enormous part of my career for over 30 years, simply the best" -Martin Flores