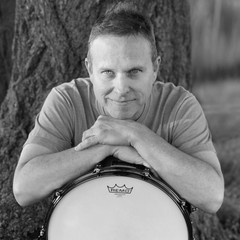 Murray Gusseck is considered an innovator in the world of marching percussion. He marched as a tenor player in the Santa Clara Vanguard from 1988–1992 and went on to instruct the group for many years afterward in a variety of capacities. In the eighteen years he was a part of the SCV organization, he received many accolades as a player, teacher, and composer.

Known for a unique compositional style and a propensity for achieving a smooth, drumset-oriented approach to the marching percussion genre, he also helped start a trend of drum line “parking lot” shows in the early 90s by writing showcase etudes for the battery ensemble to play during their pre-show warm-up routines.

In 1998, Gusseck teamed up with Jim Casella to co-found Tapspace Publications, a percussion sheet music publisher. With humble beginnings, the company went from being a marching percussion side project based on the marching compositions of its two founders to a real force in the world of percussion music.

Gusseck proudly endorses Remo drumheads, Brooks Drums, and is a signature artist for Vic Firth. He has presented clinics across America as well as in Japan, Thailand, and Singapore. He currently lives in the Pacific Northwest where he co-manages Tapspace and plays drums in Portland-based bands such as Fresh Track, Mars Retrieval Unit, and Life During Wartime.