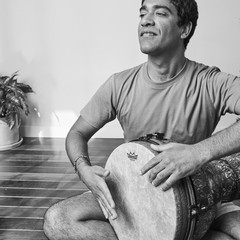 Neil Wadhawan was exposed to yoga by his father at a very young age. He grew up learning about eastern philosophy, which eventually led him to receive a B.A. in Philosophy. As a passionate musician, he has also studied western and eastern music at both undergraduate and graduate levels. The study of yoga and music has been a lifelong dedication in which he combines the two in his public yoga classes to form a unique, one of a kind experience. Classes are playful and fluid, with the heart of each class beginning with Neil playing a Remo Djembe while simultaneously instructing. The Djembe plays the rhythm of the breath called Ujjayi, an ancient yogic breathing technique, which allows the practitioners to breathe and move in sync. As a musician, Neil has played drum set and percussion in diverse groups from heavy metal, modern jazz, and Indian fusion. Neil teaches private drum lessons and public yoga classes in San Francisco and all over the world. He continues to share his love for yoga and music locally and beyond. Neil believes that in any art or discipline, one can only be a great student and never a master. There is always something new to learn and the only way to continue to grow is to remain a student.