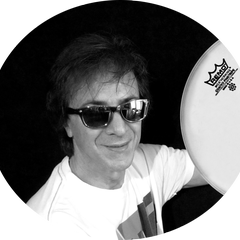 “Remo drumheads have the magic and the power to make any drumset sound right.”

He has performed as a solo artist and sharing stage, TV and radio broadcastings and albums with countless artists in several countries of South America, Europe, Southeast Asia, Russia, Japan and the USA.

Among his credits as an educator is the first book on Rock rhythms ever written in Latin America, namely Introducción al Rock/An Approach to Rock. D’Auria has taught drumming in Argentina, Spain, France and the USA, offering clinics and seminars on drumming and music reading in Argentina, the USA and cities of Spain and Portugal.

His career includes such performing artists as Sandro, Julio Iglesias, Armando Manzanero, Mariano Mores, Marco Antonio Solís; music halls and theaters such as the Olympia, Luna Park, CCP in Manila, Kallang in Singapore or Yomiuri in Tokyo. As a solo artist he recorded with his sextet the albums Afro Tango and Tango 2000.

Oscar has recently offered countless shows of Jazz and Latin music with his band Ocean Dreams hired by companies Celebrity Cruises of Royal Caribbean, Holland America and Princess Cruises sailing towards more than 50 countries. Drumming for the famous Argentinian Pop-Rock band Los Náufragos on their frequent tours of South America and TV shows, he displays his versatility and knowledge of Rock as he does in his books.