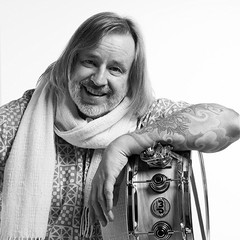 Award winning musician Pete Lockett is one of the most versatile and prolific percussionists in the World. His percussive skills range from traditional Carnatic and Hindustani music of North and South India to traditional Japanese taiko drumming; from blues, funk and rock to classical, folk and ethnic and from Arabic to Electronic.

Pete has performed to packed houses all over the world including Turkey, Australia, New Zealand, America, Canada, Malaysia, Thailand, Falklands, Argentina, Europe and India. He has released more than twenty CD’s with various projects under his own name.

Pete has taught and lectured Worldwide, including The Royal College, Berklee School of Music Boston, and The Royal Academy of Music in London. Technique articles in drum magazines number over a hundred and include MODERN DRUMMER’ in the US. Petes book, ‘Indian rhythms for the drum set’ (Hudson) was book of the year 2008 in the Dutch music press. He also released a best selling percussion app for iDevices. DrumJam was released in 2012. He also released his first full-length novel ‘A Survivor’s Guide To Eternity’ in 2014.