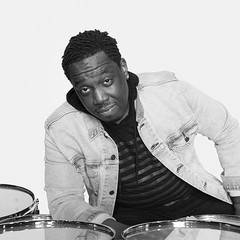 Quinton Robinson’s fiery energy and deep pocket have put him at the top of many call lists, but playing at the highest level is just the beginning of what he considers his job. “Q” can also be enlisted to run Ableton Live for a show, write a drum book for a musical, or take the helm as musical director for an artist. Quinton is currently the touring drummer for Avery*Sunshine, Anthony David and Peabo Bryson. In 2016, he was handpicked to write and perform the drum book for the Broadway-bound new musical Born For This: The Bebe Winans Story, which made its debut in his home-base of Atlanta and continued to several major cities. Since then, he has continued to maintain his demanding schedule as a programmer, musical director, session and touring drummer. With increasing frequency, his itinerary has been landing him in New York City, where he is building his network and developing another avenue of success in the world of musical theatre. “In addition to music, I’ve always been in love with theatre. The opportunity to combine the two is exciting. Being part of a musical allows me to utilize all of my talents and explore all my passions. I feel truly blessed for the opportunity to work with so many great artists, producers, and players. I am extremely grateful for my gift of musicianship.”