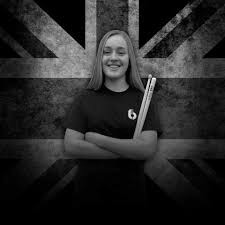 Rachel Thom was the World Solo Drumming Champion in 2018.

Rachel is the former Leading Drummer for the West Lothian Schools Pipe Band (WLSPB) Juvenile, a position which she had maintained since 2011. Rachel is now with the Grade 1 Glasgow Police Pipe Band.

Rachel started pipe band snare drumming in 2010 after attending a come and try session at one of our local schools. She joined WLSPB, which was originally a non-competing band, they played at Concerts, Parades, Remembrance Day Events and Opening Ceremonies. In 2011, the band changed to a competing band and took part in all major competitions. They won a Stellar Award for Team of the Year 2012 and were Winners of the Expressive Arts Category 2014 and also in 2014 won The Trad Award – Pipe Band of the Year.

Rachel was awarded a Stellar Award for my Achievement in Music in 2013 and in 2016 attained a National Progression Award in Music and have now achieved an Advanced Higher in Music. Rachel competed at a number of solo events achieving 1st 2nd & 3rd place trophies and medals. Also, individually participated in “West Lothian Far from Ypres”, a tribute about West Lothian’s people in World War 1 at various venues.

Rachel is a senior member of the National Youth Pipe Band of Scotland (NYPBoS), as part of the team she played at many prestigious and high profile events including for The Queen, Prince Charles, RSNO, Celtic Connections, Glasgow and Avenches Tattoos and had the amazing opportunity to play on stage with The Script at their sell out concert in Glasgow.

Rachel has taught at various camps and come and try sessions with NYPBoS and Summer camps with D2 Percussion.

For the last 3 years she has been invited to take part in ‘Innovation Drumming for Drinks’, an opportunity to showcase my musical talent to win audience votes. This event allowed her to show a different side to my performing skills.

In 2019, she completed an internship as a Drumming Tutor for one year with Scottish Schools Pipes and Drums Trust at Preston Lodge High School.