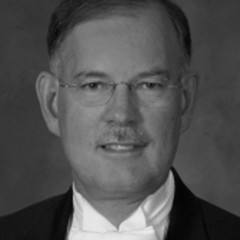 Richard T. Minnotte, Director of Percussion Studies for the Mt. Lebanon School District, located in Mt. Lebanon, PA a suburb of Pittsburgh, PA, is now in his 42nd year with the district. He is responsible for guiding and directing all aspects of the percussion program in grades 4-12, conducting the Concert Ensemble and Percussion Orchestra and assisting with the Blue Devils Marching Band.

Mr. Minnotte’s career with the Mt. Lebanon Schools began in 1973 when he was hired as Assistant Marching Band Director. In 1978, he became a full time elementary band instructor while continuing his duties with the marching band. In 1985, Mr. Minnotte began his work as Director of Percussion Studies.

The 2013/2014 school year marks the 30th season for the percussion program. Through its 29 previous seasons, the Concert Ensemble has received both local, state and national recognition. In August of 2001, the ensemble was selected by the Pennsylvania Music Educator’s Associationas one of the outstanding musical ensembles in Pennsylvania. As such, they were invited to perform at the 2002PMEA State Convention in Hershey. This honor was repeated again in 2005, 2008 and 2011.

In 2006, PMEA selected the ensemble as one of three groups for recommendation to the Music Educator’s National Convention (MENC). MTL Percussion was selected to play at the national convention in Salt Lake City, the onlypercussion ensemble in the nation so honored.

In 2010, MTL Percussion was invited to perform the “Keynote Concert” for the National Conference on Percussion Pedagogy held at the University of Oklahoma.

In 1994, Mr. Minnotte began a commissioning series to develop repertoire for high school percussion ensembles. To date, thirty-five pieces have been commissioned with seven of those having received national publication.

Mr. Minnotte’s previous positions include two years as Assistant Director of Bands at Duquesne University and three years as Director of Youth Music at the South Avenue United Methodist Church in Wilkinsburg, PA. While at Duquesne, he had conducting responsibilities with both theSymphonic Band and Wind Ensemble. In addition, he was responsible for instructing the marching band methods and undergraduate conducting classes.

Mr. Minnotte studied privately with Frank Shaffer and William Schneiderman, former principal timpanist with thePittsburgh Symphony Orchestra. He attended Duquesne University in Pittsburgh where he received both Bachelor’s and Master’s Degrees in Music Education. He is a member of the Pennsylvania Music Educators Association, National Association for Music Education, Percussive Arts Society and the National Conference on Percussion Pedagogy. Mr. Minnotte is a Malletech, Remo and Vic Firth Educational Artist.