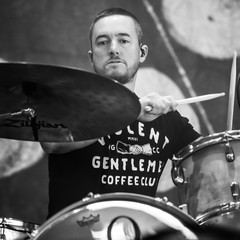 Riley Breckenridge is a founding member of the California-based rock band, Thrice, and has been playing drums and writing music for the band since 1998. He’s also released an LP with his side project, Less Art, a sludgy post-hardcore band comprised of members of Thrice, Kowloon Walled City, and Curl Up and Die. He’s also released a couple of EPs and LPs with a baseball-themed grindcore project called Puig Destroyer, as well as a handful of solo ambient/electronica tracks under his own moniker.

"Remo is the industry standard for a reason. Their reliability, durability, and versatility is unmatched, and I’m just honored to be a part of the family.  My favorite pieces of Remo gear are the CS dot heads, both coated and clear. The coated version has been a mainstay on my snare drums for as long as I can remember. I’ve never found another snare head that provides the consistency, durability, and versatility that the CS coated gives me. And I’ve got to mention those amazing hi-hat clutches. They’ve been an absolute game-changer for me. “Set it and forget it” is such a nice comfort to have during a session or a show. Having the peace of mind that my hats aren’t gonna slam shut mid-song is so nice." -Riley Breckenridge