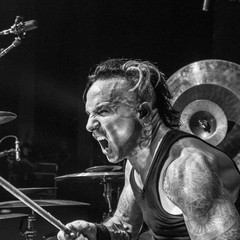 Instinct initially attracted Roy Mayorga to the drums. As a result, his playing remains primal, passionate, and powerful.  The Stone Sour drummer became inexplicably drawn to the instrument almost in tandem with taking his first steps. He recalls pounding away on his mother’s pots and pans as a child, developing a natural concept of rhythm at a very young age. At the same time, he also immersed himself in the work of luminaries such as John Bonham and Neil Peart, learning the ins and outs of their playing organically as he found his own style.

While in his teens, he joined New York punk legends Nausea. It would provide his first real recording experience 1989 and inaugural international tour in 1990. He soon became an in-demand presence behind the kit in the East Coast punk/hardcore and metal scene drumming for the likes of both Shelter and Crisis. However, everything changed for him in 1997. Mayorga teamed up with legendary Sepultura frontman Max Cavalera to cut Soulfly's landmark gold-selling titled debut. He went on to tour with the group until 1999, heading out on OZZfest 1998 and crisscrossing the globe.

After recording Soulfly 3 (2001) touring up to( 2003) stints in both Medication and ABLOOM followed for a few years.

Then, he got a call from producer Nick Raskulinecz [Rush, Alice In Chains] to drum on Stone Sour's second full-length album, Come What(ever) May in early 2006. He instantly connected with the band, recording and becoming a full-time member. As the quintet destroyed the road alongside everyone from Korn to Deftones, the sophomore set would eventually surpass Gold status becoming platinum and solidify Stone Sour as one of hard rocks leading contenders.

Now, Mayorga stands out as an integral part of the group, adding intense grooves and potent panache to the songs both live and in the studio. To date, he's been a driving force of albums:

In Stone Sour, he's also played and programmed synthesizers and penned certain songs including Threadbare,Nylon6/6,and Red city Moreover, his talents extend to multiple instruments as well as songwriting. Whether its guitar, keyboards, or drums, Mayorga approaches each with the same intuitive energy.

As a producer and engineer, he's equally adept working out of his own L.A. studio with various session work and now composing music for film/TV.

But during Stone Sour’s recent hiatus He stepped up to help friends and band “Hellyeah” on tour in support of their album “Welcome home” 2019 and celebrating the life of beloved friend and drummer Vinnie Paul.

Soon after “Hellyeah” Roy had rejoined “Ministry” to record a new album due to be out end of 2021.

Roy has been Ministry’s on and off touring drummer since 2016 and also has recorded on their 2018 release (AMERIKKKANT).

He's continually challenging himself and everyone around him.

That instinct will always serve him well.

"Remo heads truly bring drums to life and have a sound like no other drumhead. The articulation, the feel, and the tone. etc.  I've tried many heads over the years and there's nothing that compares.  I have always been a big fan of regular Emperor but these Vintage Emperors just sound ridiculously amazing. So I played them for a few weeks (they last longer than expected) and paired with a set of Powerstroke 3s to get the full experience of a matched tone with the kicks. I thought to myself, these heads on these drums would sound so amazing live through a PA when my band hits the road again and in the studio.  My playing style is very groove and tribal oriented with a lot of tom work and these heads really enhances and express the tone of my drums. At this point in my career, I really need that special sound I've been always after all this time. What truly extends and accents my personality on the drums.  All I can say is that Remo was always my first choice."  -Roy Mayorga