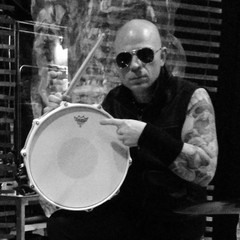 Sean Fuller, born and raised in Evansville, Indiana, started drumming as early as age 6, taking lessons from Greg Tooley, a local drum instructor. After he honed his skills, Sean eventually landed in Nashville, working on demo recordings for various hit songwriters such as Hilary Lindsey, Dallas Davidson and more.

Nashville is where Sean met Luke Bryan and toured with through his early careers, followed by touring with Justin Moore and eventually finding his home with Florida Georgia Line.  Sean has been touring with and recording with members of FGL now for 7+ years and the best is yet to come. During the past several years Sean has performed with the likes of Nelly, The Chainsmokers, BB Rhexa, The Backstreet Boys, ZZ Top, as well as various country music stars such as Tim McGraw, Brooks and Dunn, Jason Aldean, Dan And Shay, to name a few. Sean continues his path in music both in and outside of Florida Georgia Line and Nashville has been both a blessing to him and his family for the past 20 years.  Look for Sean on tour with FGL as well as other artists that enjoy his skills for years to come.

"My favorite Remo Gear?  First, lets talk drum skins. Simply the best. Most durable. Most playable. Most recordable. Best tone from any drum that I have ever heard had a Remo drum head on it! Period!

I absolutely love the Quick Lock Hi Hat Clutches. Quick on/Quick off. Hold's up under any duress I give it.

The Falam Slams are awesome! As hard as I kick sometimes, it takes the worry away of my foot going through the bass drum!! HA!!

Remo Hand Percussion has been my choice for years for both live and studio application. Never lets me down."  -Sean Fuller