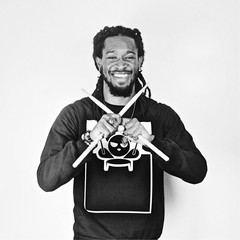 Sean picked up drums at age 2 & producing at age 12. Musicality in his blood wasn't a choice, grew up in a family full of musicians. His unique eclectic style extends from his background of playing in church with a father that believed In feeding him necessary music to be a complete well rounded musician of many styles.

At 17, he left Miami to further his education at Berklee College of Music in 2009 where he began expanding his musicality as a drummer & composer.

In 2011 he formulated the iconic live band "Nurdy Tunes" to create the hottest live band covers on Youtube. This opened doors for Sean because people loved his playing & musical direction.

Since then he's shared a stage with Big Sean, Ne-Yo, Bazzi, Ty Dolla $ign, Taeyang, Big Bang, Jason Derulo & many more. He’s now currently D Smoke's drummer. Sean's life consist of going where duty calls as the drummer while finding the time to fuel his other passion in music as a producer as he creates for other artist as well as his own music with the releasing of his first EP "Know Idea", 1st mixtape “Special Delivery” and his 2nd & latest mixtape “SD2”.