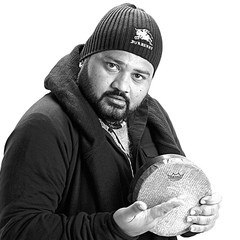 Selvaganesh’s tryst with the international music platform came in the early 90s in Masters of Percussion along with his Zakir’s father Ustad Alla Rakha and late 90's when he joined Shakti to play along with John McLaughlin and Zakir Hussain. The showman that he is, his long hair and nimble fingers had Shakti catapult to fame.

He was a child prodigy, with his concert career beginning at the age of 10. He established his right to be on the stage by playing with such dexterity that he was soon accompanying many famous vocalists in Carnatic music at the time, including Mangalampalli Balamuralikrishna, , M. S. Subbulakshmi and others.

His debut international solo album, Soukha was released in 2006 featuring all other regular members of Remember Shakti including John McLaughlin, Zakir Hussain, U. Srinivas and Shankar Mahadevan, as well as sitar player Niladri Kumar and Selvaganesh's father T.H. "Vikku" Vinayakram. He has also formed a new group called dr JSM, with the UK-based Goan songwriter/producer dr.Joel and the young Carnatic singer Mahesh. Their Indo-Celtic album entitled Turn on the dreams was released in the UK in 2005.
While the kanjeera appears to be a simple instrument, in the hands of Selvaganesh, it produces a surprisingly large palette. “He has transformed the sound and identity of his instrument—he makes that thing sound like a huge drum kit—and all the actual playing is done with one hand.” It is somehow fitting that the oldest instrument in the band is responsible for creating an almost techno vibe; the constant bell-like jangle of the kanjeera brings to mind the warp-speed jungle-groove of drum-and-bass music.

His latest venture is in the field of Indian Film Music. His debut music for a regional language film is already a super hit and he is in the process of composing for a few others.