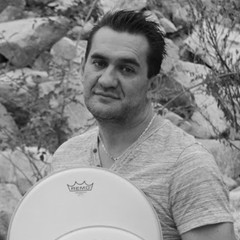 Sergio Bellotti is an international artist and Renaissance man. As a powerful and tremendously gifted drummer, he’s played with some of the world’s finest musicians. As an educator, he’s an in demand clinician as well as a professor at the esteemed Berklee College of Music. As an entrepreneur, he owns 247 Drums which caters to the needs of drummers everywhere.

Hailing from Bari, Italy, Sergio’s passion for music and accomplished drumming spurred him to move to Boston in 1995 to attend the Berklee College of Music. Shortly after arriving in the U.S., Sergio met his longtime musical partner, fellow Italian expatriate and bassist extraordinaire, Tino D’Agostino. Together they founded and continue to lead Spajazzy, a jazz fusion group, which has featured guitarist Mike Stern on both of their cd releases. Good company indeed.

In addition to his professorship at Berklee, where students from all over the world come to study, Sergio serves as a visiting artist at the GM Drum School in Torino, Italy and as a faculty member at the Conservatorio Della Svizzera Italiana in Lugano, Switzerland.

Sergio is the founder of the “Do You Speak Drumming?” program and often travels to Europe to conduct clinics, concerts and master classes. He is a drum artist for both Yamaha Acoustic and Electronic drums.

Sergio has recorded or shared the stage with world class musicians such as Mike Stern, Tom Scott, Nathan East, Robben Ford, Alessandra Belloni, Bernard Purdie and Rocco Ventrella to name but a few. He has performed at international festivals such as the Montreal Drum Fest, The Golden Jazz 2015 in China, Bari In Jazz 2010,Cape Breton International Drum Fest, Berklee World Percussion Festival and the PASIC and 5 consecutive KOSA festivals

Sergio has been based in Boston ever since arriving in 1995 and is still immersed in the city’s lively music scene. He holds down the drum throne for his weekly gig with We Jazz Up. Their Tuesday night show at Slade’s has become a time honored ritual and one never knows which talented musician might visit to sit in.

In addition to being an artist, educator and clinician, Sergio ministers to the needs of drummers with his shop, 247 Drums. The major manufacturers of drum gear have recognized his talents, and besides Yamaha, Sergio is also an endorser for Remo drumheads, Zildjian cymbals, Vic Firth drum sticks and the Vibe T5 Stick which he designed himself.

Whether playing, recording, teaching or supplying drummers with gear, Sergio Bellotti is truly a renaissance man.