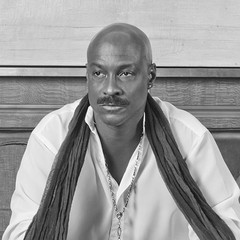 Sonny Emory can send a crowd into a screaming frenzy the moment he starts to introduce his outrageous stick twirling and back-sticking techniques into a solo. But this isn't what makes Sonny one of the most important voices on the drums today, it's just the frosting on the cake.

Sonny is a native of Atlanta who received his first drum set at the age of four. After graduating from Georgia State University with a Bachelor in Jazz Performance, Sonny began his transition into becoming a professional drummer playing with Joe Sample and the Crusaders. With over 30 years of live performance and studio work behind him, Sonny maintains a busy schedule in the music industry and is highly regarded in the business.

Though probably best known for his groundbreaking drumming with Earth, Wind, and Fire; Sonny has performed with a virtual "who's who" in pop and jazz music including Stanley Clarke, David Sanborn, Bette Midler, Al Jarreau, Paula Abdul, Jean-Luc Ponty, and Boz Scaggs. He is also known for innovative visual effects during live performances that include exciting stick-twirling and back-sticking techniques. As a World Renowned Drummer and Grammy Award Winner, Sonny is considered to be one of the greatest drummers to have come along in a while. His proficiency and style have awarded him the opportunity to record on platinum status albums such as the B52s' Cosmic Thing and Steely Dan's Grammy award winning Two against Nature.

While Sonny is in high demand as a touring musician for what he delivers during live performances, he is equally in demand for studio work. He is a former member of the legendary group Earth, Wind, and Fire, having held down the drum seat for thirteen years. Sonny has additionally played with artist that include Bruce Hornsby, Jennifer Lopez, Lee Ritenour, Bette Midler, Steely Dan and he is currently touring with Eric Clapton.

In early 2015, Sonny completed a tour with Spyro Gyra and ended the year by performing in the Dreams Come True Japanese Wonderland Tour. Currently, he is gigging with Lee Ritenour, Jeff Lorber and Bruce Hornsby and Eric Clapton. Sonny’s latest CD entitled “Love is the Greatest” was released worldwide though Universal Japan on October 10, 2017.

With a wealth of teaching experience, Sonny is committed to balancing academics and entertainment. He served as an Adjunct Professor of Applied Percussion at Georgia State University. Additionally, Sonny teaches private lessons to assist students in developing their craft and setting long-term goals in order to be successful in their chosen musical endeavors.

Sonny has performed countless clinics and master classes in academic settings, drum stores, and during national music conferences, both independently and for the manufacturers he endorses.

Sonny co-wrote the tune "Crusin", which can be heard on the score to Spike Lee's 1998 film "Get on the Bus". Also, he worked on the "Lethal Weapon II" soundtrack with Eric Clapton and David Sanborn. He most recently performed on the score to Spike Lee’s 2015 film “Chiraq”. Sonny released several projects, including “Hypnofunk” produced by the late, Maurice White, founder of Earth, Wind and Fire. Sonny has also released a jazz project entitled “E.S.P.”, and a funk project entitled “Love’s Pure Light” and “Rock Hard Cachet” featuring Eric Clapton and Bruce Hornsby.