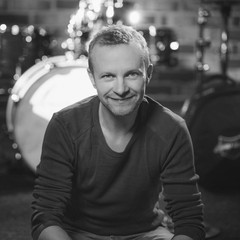 In his playing, Stephan Emig combines conventional drumming with the sound possibilities of percussion instruments and electronics to create his own creative style.

As a drummer, percussionist and specialist for Ableton Live, he is a sought-after sideman at concerts, TV shows and in the studio.

He studied at the Los Angeles College of Music, is now himself an internationally sought-after lecturer at workshops or drum camps and has a teaching position at the Institute of Music at the University of Osnabrück. He is the author of the book "5 Habits of a Musical Drummer", which has received enormous acclaim in the music press.

Since 2019 he is part of Horus Sound Studio Hannover, where he works as a studio musician and producer.