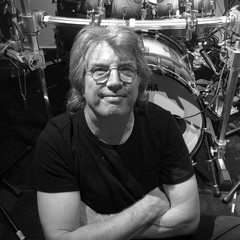 Tom Brechtlein grew up in East Meadow, Long Island and gravitated to drums after listening to the Beatles, the Rolling Stones, the Who, Cream and the Jimi Hendrix Experience. In junior high, his attention turned to big band jazz, and he became attracted to the music of the Thad Jones-Mel Lewis Orchestra. His investigation of jazz led him to Dave Brubeck's drummer Joe Morello and then to modern giants like Elvin Jones and Tony Williams as well as legends like Papa Jo Jones, Max Roach and Philly Joe Jones. "When I was 18," he recalls, "I saw Chick Corea's Return To Forever on PBS Television; and I remember sitting there thinking, ' I'm going to play with that guy someday.'" Two years later, in 1978, he auditioned with Corea and got the gig. He remained in the band till 1983, at which point he joined Wayne Shorter's band. There followed extensive road work with guitarist Al Di Meola and violinist Jean Luc Ponty before Tom finally hooked up with Robben Ford in 1986.