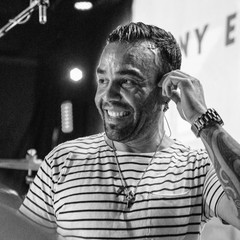 legendary icons. Phil Ramone once said to him "you are here to touch souls thru music

my friend". Born and raised in San Juan, Puerto Rico, He first picked up a pair of

drumsticks at age 9 and the chemistry was immediate. After years of careful study, his

the States taking him with. As a High School teenager Tony practiced drums constantly

original bands in the Orlando area while also performing in his high school marching,

concert and Jazz bands. After graduating from high school Tony moved back to PR to

immerse himself in it's rich music scene, before becoming one of two local recipients to

receive a full scholarship to attend Berklee College of Music in Boston. At Berklee, Tony

was chosen to represent the College around the world, and that's when his touring life

began. He travelled all over the US, and as far as Japan, and spent the summer time

Shaheen. After college Tony headed to NYC to become part of one the most important

and creative music scenes in the world. Tony was chosen as a Jazz ambassador at the

The Rhythm Collective. This quartet, led by Miguel Zenon, shares Africa's influence in

the US among other genres including Latin Jazz. With such rich influences, Tony's

drummer. With Ricky he has toured extensively around the world, performing at the

arenas all over the globe. Tony Escapa has also been in films like "The Other Woman"

produced in Cuba. Tony was a creative force behind 2 Latin Grammy winning recording

Primera Fila 2". In 2016 recorded with Spain's musical Icon Miguel Bose on his MTV

Unplugged Record while also becoming a local in the Vegas Strip, as part of Ricky

Martin's "All In" 2017 Vegas Residency Show. He has also performed and recorded with

in the music and drumming communities thanks to his impecable taste, energy and

unselfish musical versatility. He has been featured in the worlds leading Drum

Magazine, Modern Drummer and was nominated in the magazine’s Readers Poll twice

Percussion” category. In the words of one of his mentors, Jamey Haddad, "Tony not

only plays well, he make's the rest of the band sound great"...!