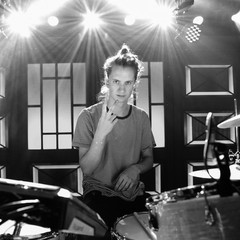 Troy Bruner has been a professional drummer since the age of 15. A versatile musician and artist born in Colorado Springs, Troy received his first drum set at 4-years-old. By 14 he started playing professionally in some of the biggest churches in the Dallas-Fort Worth area and touring with related bands. After touring during his teen years with several well known bands, Troy became drummer for Judah & the Lion at age 20 with whom he made his television debut on Conan in 2018. Troy has been apart of dozens of recording and studio sessions and routinely plays in front of thousands while touring 200 days a year. His major influences include Darren King and Will Chapman. Troy also has professional touring experience in lighting design and videography. “Bringing music and visuals together is my passion, and it all starts with the beat of a drum.” Troy's current endorsements include Remo, Risen, Vic Firth, and Istanbul.