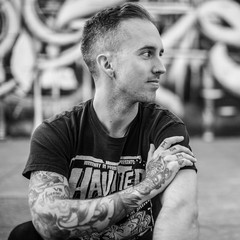 I was raised in the hardcore-emo scene in Sacramento, CA. Starting drums very late in life, I learned what a drummer was supposed to sound like after taking lessons from Mike Johnston. After realizing my passion for something greater, I moved to Los Angeles to attend Musicians Institute to take music more seriously. After graduating in 2007 I started playing for singer songwriters and pop acts. At the same time I found a love for music production by working at the backline company Center Staging. Shortly after falling into the touring world as a backline tech, I put my drummer career on hold. Working for such artists as Usher (Aaron Spears), Jay Z (Eric Geene), American Idol Tour (Teddy Campbell and Gordon Campbell), Hanson (Zac Hanson), Demi Lovato (Mike Reid), and many more.

After years of filling up two passports and traveling to 6 continents, I needed to give my drumming career a second chance. In 2014 I quit working for drummers and began drumming full time. The past few years have been amazing and kept me very busy. I've got to perform on countless TV shows, and in front of countless huge audiences. Drumming for such artists as Charlie Puth, Kiiara, Cher Lloyd, Emblem 3, Siren XX, and now currently most recently with Noah Cyrus.

In my downtime I practice my craft, collect vintage & modern drums, and take lessons as much as possible. I feel there's always something to learn from the drumming community and to gain from others.