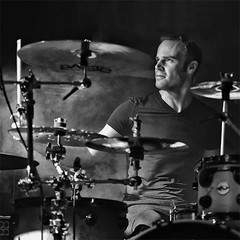 Born in 1977 in the city of Nimes, France, Vincent began music at the age of 7 at the conservatory. After studies in classical percussion and modern music, he graduated and became a teacher at the Conservatory of Nîmes (France)

He started playing drums at the age of 16 with a metal band, Lymloss, which later became the band Hord with which he made 3 CDs and will shoot mainly in France.

His areas of expertise will evolve throughout his learning journey between world music, classical and jazz bigband.

In 2009, he joined the band Lazuli whose music is somewhere between rock, progressive rock, world music and poetry.

Currently, it is with this group that he turns the most, mainly in Europe. During the concerts, he shared the stage with Fish (Support for 2015 winter tour), steve hacket, Haken, Pain of Salvation, Fear Factory, Sepultura, Tesseract, RPWL, Tony Levin, Steve Hackett, Angelo Branduardi, Planet X, Pendragon, Flowers King, Barclay James Harvest, and many other...