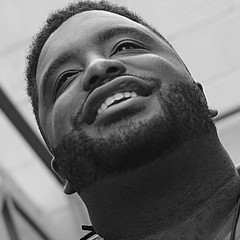 Weedie Braimah is a young premiere master of the djembe. He began his career at the early age of two, born in Ghana, where he was first introduced to West African culture and drumming. In East St. Louis, which is considered home for Braimah, he began his life long quest and professional career in the study of cultural music of the diasporas. A maverick performer of the highest caliber, Braimah has an almost insatiable knack to draw the entire audience into his grove, zigzagging through Africa on a breathtaking rhythmic roller coaster.

Braimah comes from a long lineage of musicians; including his mother, a respected jazz drummer and his father, a world renowned composer and master drummer. Having studied with the greats such as Mamady Keita, Famadou Konate, Abdoul Doumbia, and Fadouba Oulare just to name a few, it was no surprise that Braimah excelled musically and became well known on the drum and dance circuit. Braimah has been a performer, teacher and preserver of African culture for over 20 years and continues to peruse new musical journeys every day.