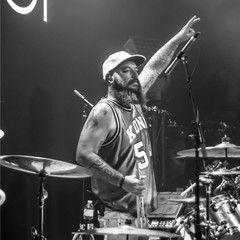 Yesod Williams grew up in a musical environment with his father playing in an Eighties Hard Rock band called THE LAW. Yesod's mother was also involved in the music industry working as a promoter and helping to promote THE LAW. A year after Yesod was born and THE LAW disbanded, the family moved to the Big Island of Hawaii and continued to pursue their musical interests. Mom was working with the top two Hawaiian Island promoters at the time and was able to bring her son to many great shows at the Blaisdell Arena in Honolulu.

It was Metallica's "And Justice For All" and Motley Crue' "Dr. Feel Good" tours which ultimately decided Yesod's future! When Yesod was 7 he was given his first instrument, a guitar which he played continuously until he received what would soon become his passion, a drum kit for his 9th birthday! Yesod's father began playing with a band in Kona and invited Yesod to join, talk about a family affair! With mom booking the boys gigs and promoting them throughout the islands Yesod's career was already promising to be a long and prosperous one!